An Ocean In The Midwest

An Ocean In The Midwest

A new ocean appeared in a Chicago suburb, and many came to see its unveiling. That ocean is, of course, an ocean of mercy brought upon ISKCON Naperville by the presence of the new Srila Prabhupada murti. An estimated 600 people visited the small temple room to celebrate this momentous occasion on the appearance of Lord Sri Ramachandra, Rama Navami. The impact was immediately felt by those visiting the temple. Dozens of devotees danced in ecstasy, while in the eyes of others flowed tears of joy upon finally witnessing the arrival of His Divine Grace at their beloved temple. 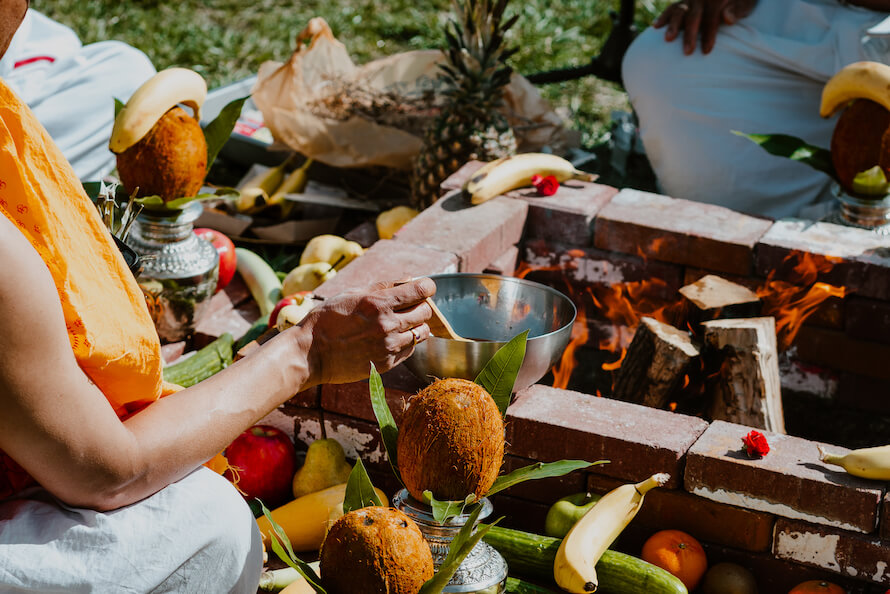 In his message, Romapada Swami said “Today is a very heartwarming celebration inviting Srila Prabhupada in his murti form to reside within and preside over this wonderful project of establishing a temple for Radha Shyamasundar in Naperville.” Maharaj also spoke about the life, vision, and mission of our founder Acharya and he encouraged everyone as we go forward to become more familiar with the life and teachings of His Divine Grace and follow his mission and mood of service.

In Rukmini devi dasi’s eloquent words she described the effect of Srila Prabhupada’s presence, “He’s really there, and you can come to him, you can sit at his feet, and you can tell him your problems and your inspirations… He’s present there. And He can speak to you. He can respond and reciprocate with your prayers and your love.” And now more than ever, devotees, well-wishers, and curious newcomers to the temple are coming to have the association of Srila Prabhupada. 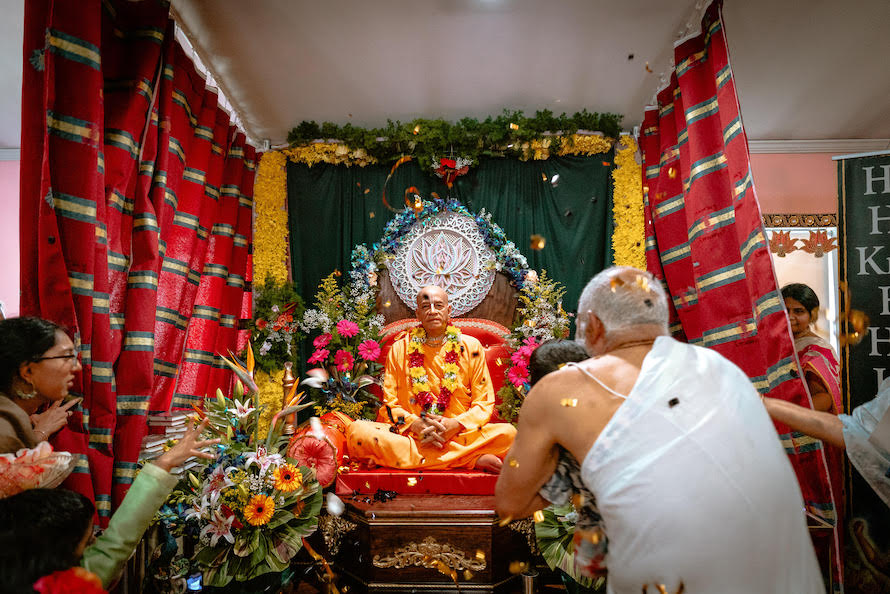 Anuttama das, ISKCON Ministery of Communications and current GBC for ISKCON Naperville who joined by video remarked, “The inauguration of this Srila Prabhupada murti will really help all of us to imbibe this important mood of compassion and equal vision towards all, that Srila Prabhupada taught us.” As we all agree, if it was not for Srila Prabhupada, none of us would-be devotees.

In ISKCON Naperville’s Temple President, Premananda devi dasi’s words, “If it was not for Srila Prabhupad none of us would be here practicing the process of devotional service, and similarly If it was not for His Holiness Romapada Swami Maharaj, there is no congregation here in Chicagoland, and Maharaj has shed gallons of blood training each and every one of us”. She also expressed her heartfelt gratitude to Romapada Swami, Anuttama das, Rukmini devi dasi, and Lochan das.

Lochana das remarked “I had just finished the murti of Srila Prabhupada for the TOVP, and people seem to like the expression very much, so I thought why not use the same expression for the murti for Naperville. So you have kind of a unique murti, and I had a lot of pleasure making it.” In addition, he sent a personal message to the congregation as well “I sincerely hope that having this murti in your temple will shower divine inspiration on all the members of your wonderful congregation and amplify their own devotion by giving them a chance to fix their hearts and minds on Srila Prabhupad’s presence in the form of his murti. It was a great pleasure for me to make this murti for your beautiful temple”.The unique characteristics of this murti are not lost on the devotees, nor the sheer importance of Prabhupada’s presence. Indeed, it is a blessing for all the congregational members at ISKCON Naperville in making the most of the opportunity to serve Srila Prabhupada’s murti form. 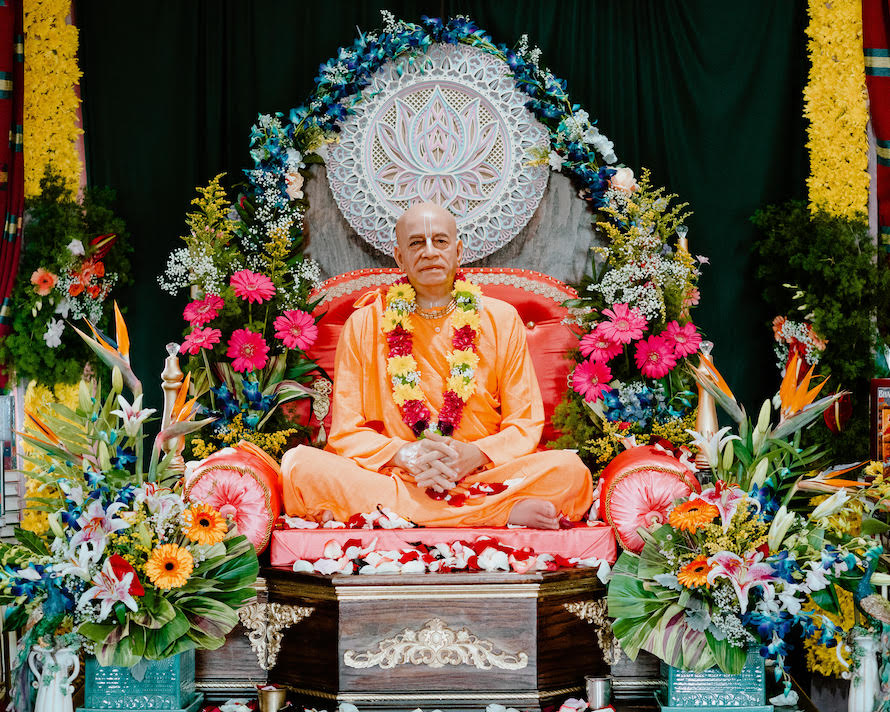 “I wanted to close with a few words about how special this murti is. This murti was created by Lochana das, who is a world-famous artist. He’s created sculptures of many, many famous people, and most notably for us. He also created and sculpted the beautiful murti of Srila Prabhupada in the Temple of Vedic Planetarium. We (at ISKCON Naperville) have a murti created by the same great personality. So we’re very fortunate to have Prabhupada appearing in this form for us ”, declared Anuttama das Prabhu to the congregation.

The arrival of Srila Prabhupada marked a momentous occasion that will forever live on in the hearts of those that attended, and the impact of Srila Prabhupada’s presence will be felt in Naperville for generations to come, as the community grows and continues to serve the mission of Sri Chaitanya and Srila Prabhupada.