With this holiday season upon us, devotees from Alachua as well as from Gainesville’s Krishna House, Jacksonville, and St. Augustine participated in the St. Augustine Christmas Parade in Florida on December 4th.

Hare Krishna devotees were the first part of the parade in 2012, for which they received the first prize trophy for best float. After receiving a trophy in 2013 as well, they have participated annually since only missing three years including 2019 and 2020.

The parade this year, as devotees returned, began moving at 10:00 am, making its way down San Marco Avenue and up Cordova Street, and ending at the Visitor’s Information Center at 11 o’clock.

Thousands lined the streets to watch the Christmas-themed presentations and floats by marching bands, dance companies, and various businesses and churches. 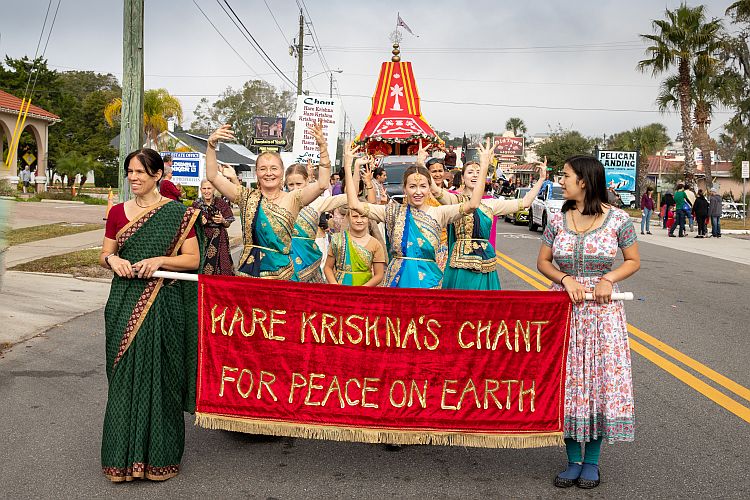 The Hare Krishna offering featured a beautiful Rathayatra chariot with a red, yellow, and white canopy, which rose to 28 ft tall with its kalash and chakra when fully extended. Riding royally upon the chariot were Sri Sri Jagannatha, Baladeva, and Subhadra deities, who stood 4 ft 6 inches tall with Their ornate crowns, and were dressed in gorgeous red and green outfits. Decorating the chariot were varieties of flowers, colorful Christmas baubles, and leaves adorned with snow-like effects.

A truck, decorated with red cloth and colorful bells, pulled the chariot so that devotees could be free to dance and chant. Worshiping the Lord, controlling the canopy’s telescopic mast, and driving the truck were Dharmaraja Das, his wife Radhakunda, his daughter Vrinda Kunda, and his son Nitai Prana. Dharmaraja and his family have been helping, along with Bhadra Das, to organize, run and fund at least twelve Rathayatras (pre-Covid) across Florida every year for the past twenty years.

Ahead of them, a group of devotee women wearing matching colorful saris emblazoned with gold danced in a synchronized fashion, behind a red velvet and gold banner that read “Hare Krishnas Chant for Peace on Earth.” 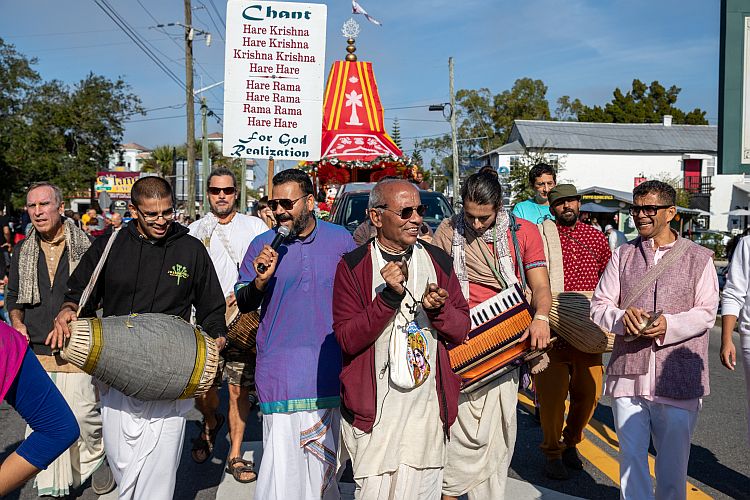 During the parade, devotees also distributed prasadam candy canes and six boxes of small books and pamphlets such as The Higher Taste, Perfection of Yoga, and On Chanting Hare Krishna. Throughout, people in the crowd sang and danced with the devotees as they passed.

According to Dharmaraja Das, the St. Augustine Christmas Parade is one of the most receptive and well-attended parades that devotees in Florida participate in.

“Almost everyone waves at us, and they always say Hare Krishna or chant in response to us,” he says. “It’s really encouraging, and that’s why all the devotees want to keep doing this parade.”

He adds, “A few of the parade organizers who passed us on the street also commented on how distinct and beautiful our float was. They liked that they could see the chariot throughout the parade because it was 28 feet tall.” 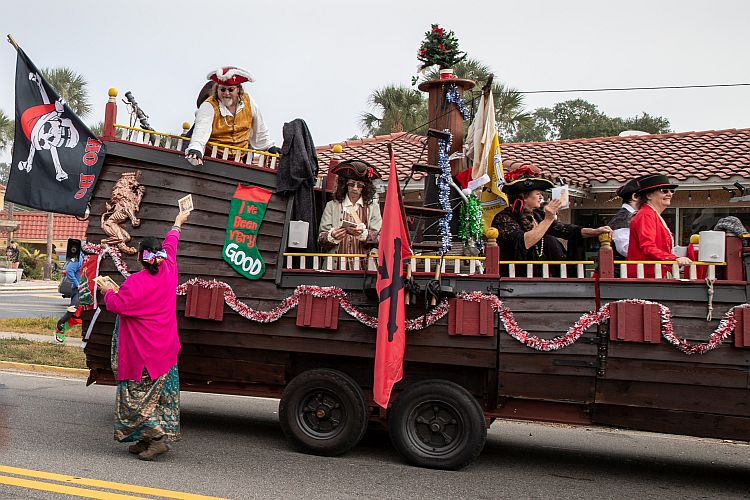 ISKCON Alachua temple president Mukhya Devi Dasi, who has been a part of all the St. Augustine Christmas parades that devotees have participated in, recalls how one brass band played the Hare Krishna tune along with the devotees as they both entered the parade. Afterwards, the drummer commented, “That was a great tune – what’s the name of that song?”

Mukhya agrees with Dharmaraja that the St. Augustine Christmas parade is particularly well-attended and receptive amongst all the Rathayatras and parades devotees do in Florida.

“I just find this parade to be a fabulous opportunity to go out and let people see and hear us, and engage with us,” she says. “A lot of people were moving to the music and chanting. They weren’t drunk, like at the football games; they weren’t making fun of us, like in other places — they were just into it. So I think it’s very unique, and for me, it’s the best of all of them.”