In the past three to four years, ISKCON in Tampa, Florida has seen considerable growth in both the devotee congregation and in efforts to reach out to the local community, although the city – the third most populated in Florida – does not yet have its own temple.

Congregational development first began in Tampa in 2011, with a handful of families. According to Regional Secretary Ramiya Das, after going through some quieter periods, during which membership gradually grew, efforts expanded exponentially under the leadership of current ISKCON Tampa president Shubhavilasa Govinda Das. When he moved to Punta Gorda, two hours away, in 2016 with his wife Manjulali-Priya Dasi, Shubhavilasa visited Tampa programs for the first year and then began taking on more responsibilities.

Beyond that is a larger congregation of wellwishers – about 500 people attended the 2019 Janmashtami celebration in person, while in 2020 and 2021 when Janmashtami was held online, a prasadam feast was delivered to the doorsteps of over 250 families. 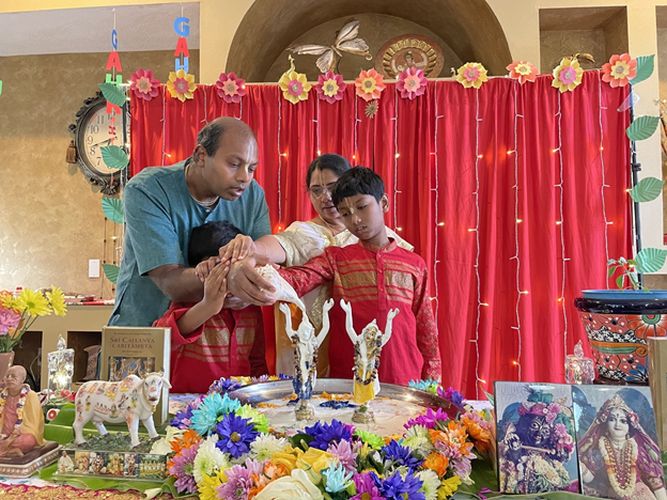 Devotees are spread out throughout various Tampa communities such as New Tampa, Lutz, Brandon, West Tampa, and Clearwater, with five or six families meeting regularly at a devotee’s home in each place for kirtan, discussion, and prasadam according to the Bhakti Vriksha model of congregational development.

Shubhavilasa explains that this saves members having to drive long distances to reach the venue. “It’s also one of the main elements of building a stronger, united community,” he says. “Because I have seen that sometimes in a bigger setting, it’s hard to personally connect; smaller groups lead to closer bonding in the family spirit.”

While Tampa devotees do an impressive amount of outreach, their first priority is programs to make sure they themselves are spiritually enriched, following Vaisesika Dasa’s motto that outreach is the overflow of one’s own spiritual practice or sadhana.

Devotees participate in a group study of Srila Prabhupada’s books together on Zoom 365 days a year, recently completing Canto Nine of Srimad-Bhagavatam, with senior Vaishnavas giving guest lectures on weekends. In addition, they have a morning japa call every day from 5 am to 7 am, as well as weekly Bhagavad-gita study in three languages. The English class, with Shubhavilasa Govinda, is held on Saturdays, while a Telegu Bhagavad-gita class is run by pioneers Suddhir and Renuka, and a Bengali class by Bipul and Nayan, inspiring many devotees.

These programs help Tampa devotees to improve their own sadhana, and to reach out to share Krishna consciousness with others in a variety of ways.

For instance, congregation members distributed about 30 Bhagavatam sets last year and over forty this year for Bhadra Purnima. For Gita Jayanti, they distributed 1,400 Bhagavad-gitas in 2020 and intend to increase fifty percent this year to 2,100.

Devotees hold Monthly Sankirtana Festivals during which they distribute the Holy Names, prasadam, and Prabhupada’s books in different locations around Tampa, primarily outside Indian grocery stores. During Kartik month, from October to November, they presented people emerging from stores with a prasadam cookie, and a lamp to offer to Lord Damodara, inspiring many to buy Prabhupada’s books. Since Covid numbers were low, the congregation also held 25 Kartik programs at 25 different locations, including homes, open parks, and community halls, offering some 500 plus lamps.

Meanwhile pre-Covid, Tampa devotees participated annually in the Gasparilla Parade of Pirates, bringing the Maha-Mantra, prasadam, and Lord Jagannath on His chariot to an estimated 300,000 to 400,000 revelers.

The effort was organized by Bhadra Das from Alachua as part of his Festival of Chariots program, which puts on nine Rathayatras around Florida. One of these is is the Clearwater Beach Rathayatra in the Tampa Bay area. This year, the Rathayatra was held in September 2021, with a parade on the beach and 108 preparations offered to Lord Jagannatha. 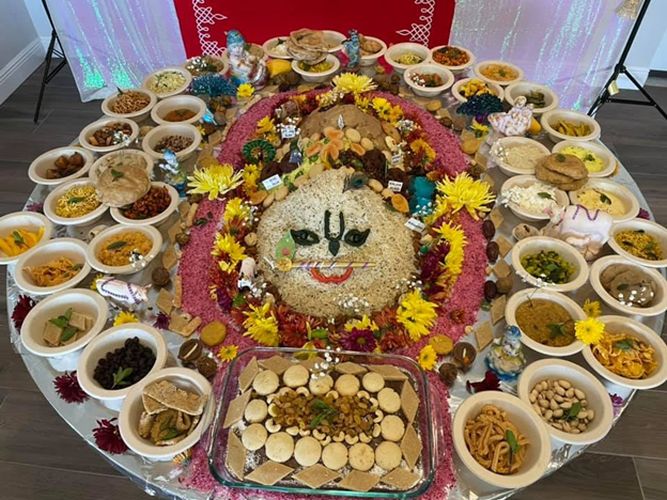 ISKCON Tampa also recently started its own Rathayatra, which due to Covid was not a public event this year. Held in the summer outside the home of local devotee and Jagannath pujari Bonkim and his wife Sharmila, it attracted 100 devotees, while prasadam and books were distributed to inquisitive neighbors. Next year, the Covid situation allowing, ISKCON Tampa hopes to have at least 300 people attend.

As far as other outreach efforts are concerned, devotees have been sharing Krishna consciousness with students at the University of South Florida in Tampa – the fourth-largest university in the state – since 2012. Regional Secretary Ramiya Das and his wife Ananta Dasi have been holding weekly programs at the university for the past six or seven years, and now have a core group of about a dozen members.

“Some of our previous graduates from USF are now chanting sixteen rounds a day and looking forward to initiation,” Ramiya says.

Children’s programs are also offered: in 2020 and 2021, devotees like Renuka, Bhasvati, Padma-sakhi, and Sujoya ran a Zoom summer camp, which taught fun skills like crafts and cooking to 75 kids from all across Tampa. Meanwhile every Sunday evening, there are interactive Zoom Bhagavad-gita classes for kids, with senior devotees like Bhakti Rasamrita Swami and Vaisesika Das presenting their certificates once they have learned key verses. 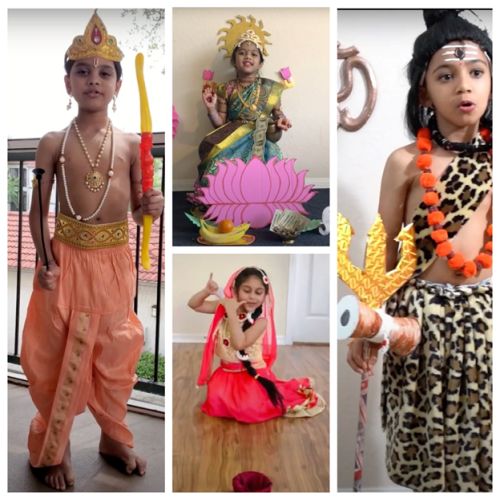 Because there’s no temple in Tampa, festivals like Govardhana Puja and Janmastami are celebrated in community halls. This year, the two-day Janmastami festival began with an online program on Saturday that 100 families joined on Zoom, featuring abhishek, katha, kirtan, and a fancy dress and coloring competition for the children. A select number of families then attended in person at the community hall on Sunday, while prasadam packages – each made to feed four people – were delivered to 250 families around Tampa.

ISKCON Tampa also recently held a major kirtan event as part of the global kirtan protests for Bangladesh, as well as an interfaith prayer vigil for Bangladesh ISKCON and Hindu temples with 12 other faith groups. Next, on January 1st, devotees aim to kick off the new year with a Gita Jayanti Yajna.

“The most notable thing about our group in Tampa is that they’re completely focused on outreach, whether it’s books, prasadam, one on one preaching, or festivals – and as a result, Krishna is rewarding us,” says Ramiya Das. “And not only do the devotees do outreach, but they personally mentor people as they become more interested, getting them to regularly study Bhagavatam, and take up chanting Japa.”

ISKCON Tampa devotees do all this while also holding full-time jobs and caring for their families. Looking to the future, they are dedicated to continuing growing and learning. 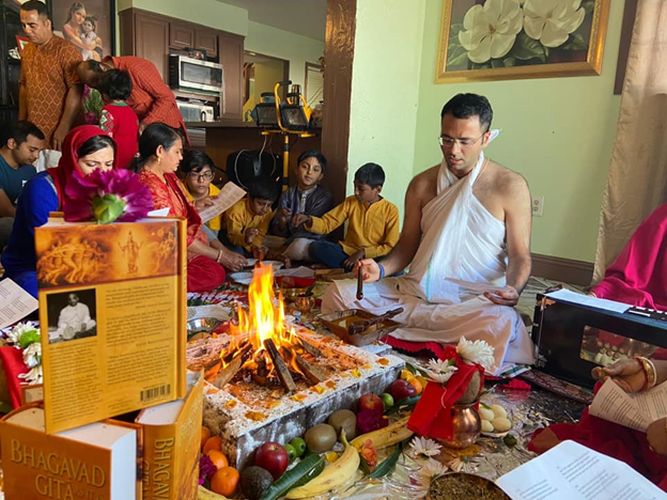 “We are a growing community – there are always lessons learned, and attempts to continually improve,” says Shubhavilasa Govinda Das. “Our mission is to not just grow in numbers, but also in quality so that there is a fine balance of taking care of the existing devotees, while we are trying to expand. We have faith that Krishna will continue to guide us through His devotees and through his books. Tampa is one of the top five cities in the US that people have migrated to during Covid, which has opened up more opportunities for us to share the message of Lord Chaitanya and Srila Prabhupada. So we pray to all the devotees who are reading this, to bless us and to please empower us so that we can continue to serve.”

Readers can reach out to ISKCON Tampa for any suggestions, questions, or ideas for improvement at iskcontampa.com or on their Facebook page https://www.facebook.com/IskconTampaFlorida.